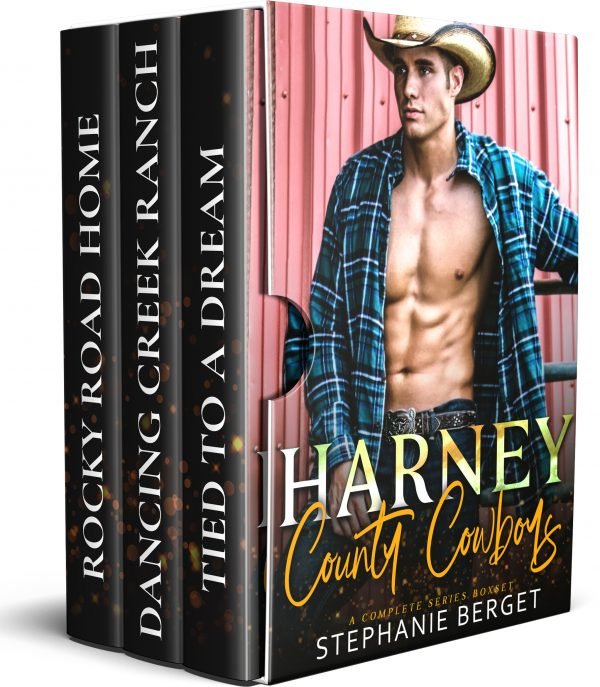 Tied To A Dream

Not even the Marlboro Man himself!

Being alone has taught Frannie to be self-sufficient, but being Superwoman is harder than it looks.

She’s pulling an all-night drive to reach her next rodeo. It’s past midnight on a lonely mountain road, and if she doesn’t catch a few winks, there’s a better than average chance she’ll run her rig into the river.

Dreams of winning barrel races are interrupted when a stranger knocks on her truck’s window. He’s a cowboy by the looks of his black Stetson and tight Wranglers. But what’s the man doing out here?

His deep blue eyes and sexy smile have her reaching for the door handle when her brain finally takes control. Her mama taught her manners, and her daddy taught her to be tough. But, her brother and her ex pounded home the fact that not everyone is trustworthy.

His offer of aid is tempting.

She knows being safe is better than sorry, but he’d helped her earlier at the rodeo, and sometimes a cowgirl has to go with her gut.

She couldn’t leave the idiot there to die.

But what was she going to do with a half-frozen cowboy?

Dancing Creek Bar manager, Catherine Silvera, stared at the waterlogged, unconscious man sleeping in the only vehicle left in the parking lot. His Stetson was crushed beneath his head. Did she know him?

At three a.m. the other employees and patrons were gone. Her first inclination was to leave him to sober up. But the temperature was dropping faster than Wiley Coyote’s anvil. Her second thought was to call the sheriff.

Her hand hovered over the cell phone.

Wait! She recognized the cowboy.

This man had helped her years ago, when she couldn’t help herself.

The smell of liquor filled the interior of the truck. Drunks were above her pay grade, but she owed him. It would only take a few minutes to repay his kindness then make tracks like a coyote-shy rabbit with hot breath on her tail.

Get your copy of Dancing Creek today.

That wasn’t a cowboy!

So why was she still checking him out?

The rumble of the Harley drowned out the radio in her truck. George Straight sang about Amarillo and she just stared. The light seemed to stay red forever, or maybe time had stopped. Why didn’t the pony tail and leather jacket bother her? Maybe it was the cheekbones?

He turned his head. The chiseled chin pointed right at her and paused. Sissy flashed her best smile, wondered if her hair was a mess, and without even knowing why, switched on flirt mode. It was a mindset she stepped into when she wanted to make the cowboys fall in love with her.

Nothing!
He didn’t nod.

She wondered if he winked but couldn’t tell behind his sunglasses.

The light turned green and the thundering horses of his hog took him away. Even though he’d gone, she remained in the moment. She didn’t hit the gas. She just kept thinking to herself, who was that man? And why would she care? She liked cowboys.

He was definitely not her type.

And time started again, but would she ever be the same?

Her story would soon begin in a way she never imagined possible.

You’ll love this contemporary western romance because not everyone is what they seem to be.