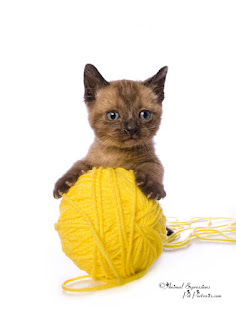 Munchkins
are a genetically natural breed of cat commonly called the Corgi of the cat world. Short-legged cats have been documented a number of times around the world since the 1940s. A British veterinary report in 1944 noted four generations of healthy short-legged cats which were similar to normal cats except for the length of the legs. This line disappeared during the Second World War but other short-legged cats were spotted in Russia in 1956 and the United States in the 1970s. In 1983, a music teacher in Louisiana found 2 pregnant cats who had been chased by a bulldog under a truck. She kept one of the cats and named her Blackberry and half of her kittens were born short-legged. One of the short-legged male kittens from one of Blackberry’s litters was given to a friend, and she named the kitten Toulouse. It is from Blackberry and Toulouse that today’s Munchkin breed is descended.They tend to be on the small side,  typically weighing between 4 to 8 pounds when full grown. However, they tend to think they are as big as a lion. Approximately 40% of the kittens will be born with long legs, such as Fancy, a Cinnamon Point kitten. Born in a rainbow of colors, most of my kittens were touched with a form of the Chocolate gene. They ranged from Bramble, a Dark Chocolate to Dreamy, a rare Lilac Point. As Dreamy aged, her ears, legs and nose darkened to a soft lilac while her body remained cream.
Miss Congeniality (Genie), Smoke and Mocha are varying shades of Chocolate.
Bella is a Seal Point.
My favorite color is the chocolate tabby–Tumbleweed.
The Munchkin is generally described as a sweet-natured, playful, people-oriented, outgoing and intelligent cat which responds well to being handled. They have a ferret-like personality. They often behave more like a dog than a cat. Although their legs are very short, some barely over an inch long, they can jump as high as a regular cat and get into just as much mischief. Find out more about Munchkins at Wikipedia
I currently own two Munchkin short-legs, Martin and Mysto Magia, a chocolate long-leg daughter of these two, Bosco and a run of the mill, 17 pound black cat named Darwin.They live happily together with my Border Collie, Dottie.
Who was your favorite cat? Have you owned a special breed cat? What did you think of their personalities?

Stephanie is an Evernight Publishing Author